The Standard Oil heiress, arts patron and fashion icon Millicent Rogers left behind a life of East Coast high society to settle in a rustic adobe home in Taos, New Mexico, in 1947. The following is an excerpt from a letter she wrote to her son Paul Peralta-Ramos in January 1951, two years before she died at age 50. 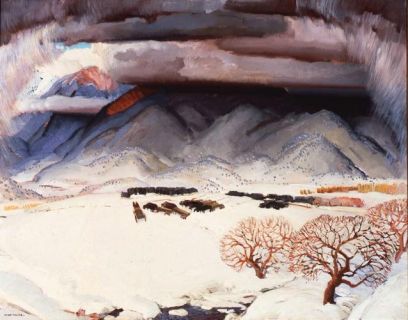 “Did I ever tell you about the feeling I had a little while ago? We were driving with Dixie and John; suddenly passing Sandia Mountain [near Albuquerque] I felt that I was part of the Earth, so that I felt the sun on my surface and the rain. I felt the stars and the growth of the moon; under me, rivers ran. And against me were the tides. The waters of rain sank into me. And I thought if I stretched out my hand[s] they would be earth and green would grow from me. And I knew that there was no reason to be lonely, that one was everything, and Death was so easy as the rising sun and as calm and natural–that to be infolded in Earth was not the end but part of oneself, part of every day and night that we lived, so that Being part of the Earth one was never alone. And all fear went out of me–with a great good stillness and strength.

“If anything should happen to me now, ever, just remember all this. I want to be buried in Taos with the wide sky…. One has so little time to be still, to lie still and look at the Earth and the changing colours and the tones–and [listen to] the voices of people. And cloud and light on water, smells and sounds and music and the taste of woodsmoke in the air. Life is absolutely beautiful if one will disassociate oneself from noise and talk and live it according to one’s inner light.”

The excerpt above is from Cherie Burns’ new book Searching for Beauty: The Life of Millicent Rogers (St. Martin’s Press). As many had been before her, Millicent Rogers (1902-1953) was enchanted by the mystical power and beauty of the rugged New Mexican landscape, and she lived out the last six years of her fragile life in Taos, becoming involved with Indian causes and collecting artifacts from the region. Her excellent collections of Native American jewelry and pottery, Hopi kachinas, Hispanic santos and Rio Grande textiles can be seen at the Millicent Rogers Museum in Taos.
Indianapolis-born painter Victor Higgins (1874-1960) migrated west to Taos in 1914 and was one of the early members of the influential Taos Society of Artists. His award-winning painting “Winter Funeral,” set at the foot of the Sangre de Cristo Mountains in Taos, was influenced by both his mother’s death and the funeral of a Taos boy who was killed in a car accident.

4 Responses to “Under me, rivers ran…”